Dog grooming Houston requirements can vary based on the type of dog you have. If you have a mixed breed dog, that can add an extra element of uncertainty into the mix because you do not know which traits a young dog will inherit from each parent.

A Labradoodle is a type of “designer dog.” In the United States, they are created by breeding a Standard Poodle with a Labrador Retriever. However, the genetic makeup of the Australian Labradoodle has several different dog breeds in the mix. The original purpose of breeding Labradoodles was to create service dogs that do not shed so that they could assist people with allergies or who have family members with allergies. 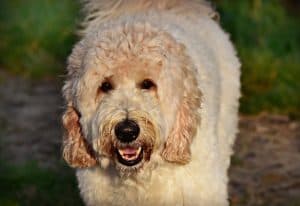 Descending from two dog breeds known for their intelligence, gentleness, and sweet-tempered natures, Labradoodles quickly became popular even among people who do not have allergies for their adorable faces, curly coats, and fun-loving personalities.

Though a Labradoodle is a hybrid rather than a distinct breed, they are in such high demand that a Labradoodle puppy can be more expensive than a pure breed.

Labradoodles have a reputation as a hypoallergenic dog, but some shed. It depends on whether they inherit coat traits more from their Labrador parent or their poodle parent. Labradors have two-layered coats that are straight, coarse, thick, and shed all year. Shedding becomes more profuse during the transitional seasons of spring and fall. Poodles, on the other hand, have a single-layer coat that is characteristically curly and very dense.

Contrary to popular belief, poodles do shed, but the shed hair doesn’t fall to the ground. Instead, it gets caught in the coat. People with allergies to pet dander often find that being around poodles does not trigger their symptoms. Labrador coats come in three different colors, but poodles can show more color variation, meaning that Labradoodle coats may come in a wide array of colors.

At the very least, a Labradoodle should be groomed once a week. Some require grooming twice a week. Dog training Houston can establish a routine and help your dog accept the following essential grooming tasks: 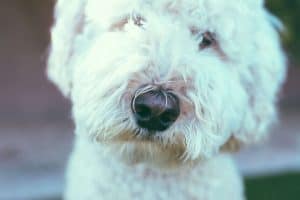 You will probably not have to trim your Labradoodle’s nails every week, but you should still make a habit of checking your dog’s feet during weekly grooming.

Most of the time you spend on weekly grooming of your Labradoodle will be devoted to coat maintenance. The curly fur can become tangled, and the tangles can become mats if you do not remove them. For this purpose, you want to start with a detangling spray, but be careful that it doesn’t get into your dog’s eyes by shielding them as you spritz. Then, remove any tangles with a slicker brush followed by a comb.

If your dog has inherited a two-layer coat from the Labrador parent, you may also need to use an undercoat rake while grooming. This tool gently extracts any debris trapped in the coat, as well as excess hair, without harming your Labradoodle’s skin.

Labradoodles need baths at least three times a year, though some owners bathe them as often as every month. You can do this at home or take them to a groomer. If you do it yourself, you should make sure that you use shampoo and other cleansing products specifically formulated for dogs. Otherwise, your Labradoodle’s skin could become irritated as a result.

If you leave your dog’s hair unattended, a Labradoodle’s coat can grow to a length of three to four inches. Because brushing a coat of this length can take longer, most owners opt to have their Labradoodles clipped every three to six months.

A long clip is about two inches in length. It prevents you from having to visit the groomer as frequently, but it may also be more prone to tangling.

A short clip is about one inch long and requires more frequent trimming to maintain, but it doesn’t develop as many tangles and is easier to brush out.

Our Services Extend Beyond Dog Grooming in Houston

At the Dog House Pet Salon, we offer more than just grooming. We also provide dog training and dog boarding Houston for all breeds and sizes. Find out more about pet bathing and grooming or contact us for an appointment.